WUCWO – Meeting with the Pope

A Message from the World Union of Catholic Women’s Organisations

MEETING WITH THE POPE

We thank Pope Francis for granting a private audience to the WUCWO authorities, who were received in his library on 10 January 2020. The meeting, which lasted approximately 40 minutes, made it possible to express gratitude, on behalf of the 8 million members of our organisations, for the delicate and frequent attention the Holy Father gives to women, particularly the most vulnerable, throughout the world. The conversation was mainly in Spanish, with some exchanges in Italian.

The Pope received the President, María Lía Zervino, Servidora, the acting Secretary General, Board Member Andrea Ezcurra, Servidora, and the Ecclesiastical Assistant, Father Gerard Whelan, SJ. This meeting, unprecedented for WUCWO, developed quite spontaneously, through free dialogue and close relationship. In the past, St Paul VI received the President of the time, Pilar Bellosillo; St John XXIII granted a large audience to WUCWO; and St John Paul II, Pope Benedict and Pope Francis himself received the greetings of our authorities, either in public audiences or after a Eucharist in which they participated.

The Holy Father welcomed our representatives with great affection and joviality. At the beginning, with his usual sense of humour, he joked about the women and the Jesuits in a way that created an atmosphere of trust, relaxation and joy. The whole conversation that followed took place in that friendly tone. He was given three books as a gift, and in turn, each one of them received a rosary as a gift from His Holiness. From the beginning it became clear that the great riches of WUCWO are the daily experiences of the member organisations at the local level, which allow each woman to move towards holiness. A holiness that the Pope calls “next door.”

After the presentations and thanks, the President and the Ecclesiastical Assistant gave a brief introduction on WUCWO, its history, its current resolutions and its willingness to collaborate for any pastoral action proposed by the Holy Father in relation to the synodality of the People of God, which as we know is composed of such a high proportion of women. WUCWO affirmed to be a living observatory of lay women on the various continents. The Pope said: “It is women who carry the Church forward without holding official positions.”

The central theme was that of women and the Church; not only from the perspective of their “functionality,” but also with a focus on how the lay women of WUCWO, with their distinctly feminine “being,” can contribute to the development and application of the “Marian principle” within the Church and to the manifestation of the face of the Church in today’s world. The dialogue then turned to some of the concrete projects underway. We also talked about significant issues for the pontificate today, such as gender ideology, our responsibility before the abuse of minors and inter-religious dialogue for human brotherhood, to which WUCWO is committed.

Before wrapping up the conversation, the Pope was asked to bless all the women of WUCWO, their families, countries, organisations and projects. In his final message the Holy Father encouraged all women members of WUCWO organisations to move forward on the path to holiness with courage, but also with craziness. He said: “Without craziness there is no holiness.” He recommended that we be like Mary Magdalene who was crazy enough to announce the resurrection of Jesus to the apostles, even though they did not believe her. His exhortation was: “Take charge with courage”. 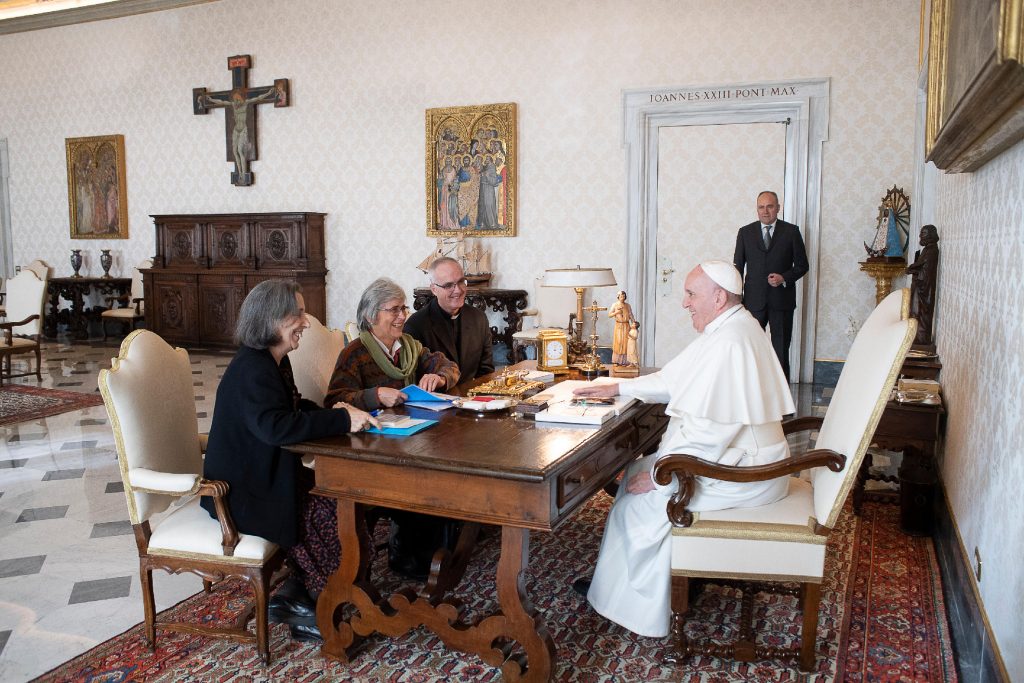