“This land is your land, this land is my land from Bonavista [Charlottetown, Prince Edward Island] to Vancouver Island [Nanaimo, British Columbia]. From the Arctic Circle” [Yellowknife, Northwest Territories—close enough!] to the Great Lake waters [North Bay, Ontario and Trois Rivieres, Quebec]. This land is made for [the League]!”

Last month’s message covered my visits to Yellowknife for Mackenzie Diocesan Council’s convention and North Bay for Sault Ste. Marie Diocesan Council’s convention. In May, I visited the equally beautiful locations of Charlottetown, Nanaimo and Cap-de-la-Madeleine in Trois Rivieres, where there was a great sense of longing to gather, filled by the gladness of being together.

The emotions, hugs and stories of gratitude were the same at all conventions. Thanks to the outgoing and incoming presidents for hosting members so well, not to mention my appreciation of you thoughtfully including me in your days.

Attendees at Prince Edward Island Provincial Council’s 100th anniversary in Charlottetown were ecstatic to have 102 years young Mary Rattelle and Lieutenant Governor Antoinette Perry join in the festivities. The line dancing was a fun activity that many members did not want to see an end. Thank you for ensuring I had not only one but two lobster rolls during my stay. Victoria Diocesan Council was thrilled to have diocesan spiritual advisor Fr. Alfredo Monacelli and Most Rev. Gary Gordon (Victoria) in attendance at its 94th annual meeting of members in Nanaimo. Bishop Gordon lifted members’ already high spirits when he said, “the CWL is a powerhouse!” Having Holy Trinity and St. Peter parish councils work together to host the event was a brilliant way to create relationships. Quebec Provincial Council’s 74th annual convention was held at Our Lady of the Cape Shrine and Cap-de-la-Madeleine in Trois-Rivières. The surroundings themselves—the basilica, rosary bridge, way of the cross grotto, old shrine and vast treed gardens—added to the spirituality of the convention. The photograph below shows painted stones (black with a cross) received by everyone in attendance. In the same photograph are samples of recently held fundraisers of “Sow for Peace,” which was a flowerpot with that quote and a package of sunflower seeds. Another fundraiser was stones painted with the heart and sunflowers raising funds for Ukraine. Honorary Life Member Lorette Noble was in attendance, to the delight of everyone. 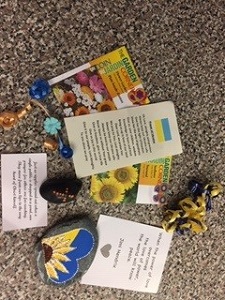 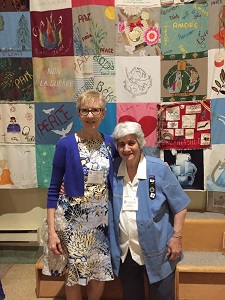