It is really happening—I have been to two diocesan conventions! The first in-person convention for me was on April 23rd in North Bay, Ontario, for the Sault Ste. Marie Diocesan Council. The 111 members present were exuberant to be together to hear all that this Catholic Women’s League had accomplished in the last year and what was coming. One of the speakers, Jackie Hookimaw-Witt and her husband Norbert Witt shared the story of the tapestry they had brought along. Children created the tapestry, and it spoke to the time before, during and after residential schools. It was a moment of pride when the mayor of North Bay joined Diocesan President Cathy McKinney, several members and me for a flag-raising at City Hall. Then, on the local evening news, an interview with Cathy and I was aired for the entire community to know the League was alive and well.

April 29th to 30th was a time with League sisters from the Diocese of Mackenzie-Fort Smith in Yellowknife, Northwest Territories. Sr. Maggie Beaudette from Hay River drove Georgina Fabian and I the five hours to Yellowknife. You cannot believe my surprise to realize the next day that Georgina’s interview is in the supplement of The Catholic Register for the League’s 100th anniversary! It is on page 16 and is a must-read. What a pleasure and education that trip was with Georgina sharing personal stories and Sr. Maggie’s excellence as a tour guide. Acclamations of positions for the executive filled their needs for the next two years. At the closing mass, Most Rev. Jon Hansen (Mackenzie-Fort Smith) spoke of the installation of the new Catholic Women’s League executive, and the children receiving their first communion at the same celebration was special. The banquet included Most Rev. Hansen and Yellowknife pastor, Fr. Marek Pisarek. It was a perfect ending to the convention with dancing, laughing and hugging.

With three conventions scheduled for May, I look forward to being with members from Prince Edward Island, Quebec and Nanaimo, British Columbia. 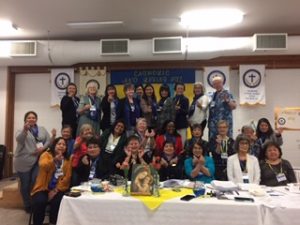 Attendees at the Mackenzie Diocesan Convention in Yellowknife, Northwest Territories. 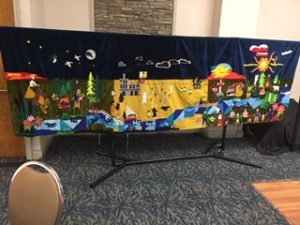 Image of a tapestry created by children, brought by guest speaker, Jackie Hookimaw-Witt to the Sault Ste. Marie Diocesan Convention. 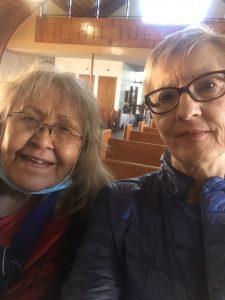