On this glorious Sunday morning delegates had a choice of two tours, one at Heritage Park, the other to the National Music Centre. Heritage Park is 127 acre living history experience with 180 unique exhibits and an incredible journey through Western Canada from a timeless First Nations’ encampment to a rustic settlement, from a bustling young prairie town to a mid 20th century urban square. (Map Handout)  Throughout there are knowledgeable costumed interpreters in the buildings and tour guides willing to explain the history and give a flavour of what life was like in those days.

Arriving in yellow school buses, delegates were treated to a delicious pancake breakfast on the mezzanine floor of the Gasoline Alley Museum which houses displays of early 20th century automobiles and gas pumps. Three engaging and well informed guides led groups on a tour of the village centre which replicates an early prairie town. Many buildings are originals that have been moved to the site such as St. Martin’s Anglican Church, Canmore Opera House, Banff RNWP barracks and Wainwright Hotel and Bar. In the church, members from Quebec were pleased to see a fleur de lis design in some of the tapestry but the “minister” explained that the design was simply a symbol of the Trinity. The Wainwright Hotel was originally built in another town in expectation of a railway station but when the station came to Wainwright instead, the owner simply dismantled the logs and floated them to the new town, prairie ingenuity at work.

To add to the delights of the town a roving band of players presented a play called The Runaway Bride with music and dance at different locations in the town. After the guided tour members were left to freely roam and explore. Some took the train that circles through the park while others opted for a short paddlewheel boat ride. I went with some delightful members from the Diocese of Hamilton to the settlement where we saw tipis, and learned that the painted one was a depiction of a dream vision. At Our Lady of Peace Mission Church, built by Oblate Father Lacombe, we heard of the history of early missionaries bringing the gospel, education and health services to the West. In three short hours we could only experience a fraction of the park but all visitors agreed that it was a most informative and interesting experience. The laughter and chatter on the ride back testified to a good time.

Members who went on the tour to the National Music Centre described it as a must see for anyone interested in music.  They spoke of an impromptu performance on an organ that was used in silent movie houses and a grand piano that looks like an aeroplane.

Back at the hotel we had to quickly change from fun to business at the resolutions dialogue session. The resolutions process with its new changes was carefully explained and delegates got a first look at the resolutions to be presented at convention. They were able to discuss, ask questions, submit housekeeping changes and draft possible amendments. From the hum in the room one could tell that people were actively engaged in the dialogue.

The warm welcome from Calgary continued with even the weather contributing greatly to the warmth. The fans decorated by school children were very welcome as we gathered on a lovely sunny Sunday evening to offer praise and thanks to God at the opening mass in the beautiful light-filled church of St. Albert the Great Church. Praying the rosary before mass helped focus the congregation. The mistress of ceremonies Jan Myhre said, “tonight we begin a journey, a journey to celebrate the League. A nice touch in the liturgy booklet was the reflection notes for the precession of the flags, always a stirring moment at convention. National President Anne-Marie Gorman read a letter of welcome noting the faith and community in the diocese and the natural treasure of the city. She mentioned the World Union of Catholic Women’s Organization’s focus on the Samaritan woman at the well reminding us that as Christian women we strive to pour living water on all who need.

Bishop William McGrattan (Calgary) acknowledged that the readings were a challenge. He spoke of tough times and the cross as a symbol of such. But the readings give hope calling for inner strength that comes from God, self-giving and the working of the Holy Spirit. Jeremiah was not successful in the eyes of the world, but he proclaimed the word of truth in season and out, sometimes questioning, lamenting but never discouraged. The letter to the Hebrews shows a good pastor giving encouragement. Bishop McGrattan stressed the virtue of obedience which is at base hearing God’s voice and dialogue with God in order to dialogue with the world. It is a call to the heart. The Gospel speaks of fire that transforms and transfigures. We must be a voice in the world, a voice that dialogues and points to the integral dignity of each person. As Christians we bear witness, hear the cry of the earth and the poor, and recognize that without the cross the beauty and glory of creation will not be protected.

After the liturgy concluded, several speakers brought greetings. Calgary Diocesan Spiritual Advisor Fr. Jonathon Gibson, while confused as to which madam president, showed no confusion in his message where he called the CWL “Canadian Witnesses of Loyal Love”.

Alberta Mackenzie Provincial President Judy Look enumerated the beauties of the province and thanked the hosting diocesan council of Calgary. She described this as a challenging time in the League and reminded us that like Mary we are called to birth Jesus to the world.

National Spiritual Advisor Bishop Stephen Jensen’s (Prince George) message was short and to the point. He called us cooperators and co-responsible agents in the work of the gospel.

Chief Superintendent of Calgary Catholic School District Gary Struthers told a cute story of a kindergartner whose worried mother asked a neighbour to follow him to school when he started.  The neighbour readily agreed taking her toddler for a walk. After a few days a little friend asked the boy about the woman following him, whether he knew her. “Oh yes”, he replied. “That’s Mrs. Surely Goodness and her daughter Mercy just like it says in the Bible ‘surely goodness and mercy shall follow me.’” He spoke about the Grace project which, with the help of CWL and Knights of Columbus cares and advocates for the future of Catholic education.

Mary Ruth Macdougall a First Nation elder from the Blackfoot Confederacy and CWL member greeted us in her native language and told us about the three treaties in the province. She said we have done much but more is needed.

Calgary Mayor Naheed Nenshi with wit and humour brought greetings to all my relations and welcomed us to a modern city on ancient land where people came because of the water and engaged in the human act of building community. He said that the gospel made him think about the world in which we live where voices of division are becoming prevalent. How do we respond? Remember we live in a country, a land with people imbued with the spirit of service, where everyday people make change happen: e.g. the church lady. We as people of faith have more that unites than divides us, especially in our service and recognition of the inherent dignity of each and every person. He said he often turns to the prayer of St. Francis “Make me an instrument of your peace”. How do we do this? Through service, love, compassion, since mercy will always win. He then asked us to join in the traditional Calgary greeting often referred to as the “mating call” of the Calgarian: a resounding YAHOO.

On behalf of Alberta Premier Jason Kenny, Education Minister Adriana LeGrange, a CWL member, brought greetings. She noted CWL goals and said she strives to apply these in her work for the future of children. She has proposed an act to state that parents are the primary educators and to underline the importance of choice in education systems.

The mistress of ceremonies read letters from Lieutenant Governor of Alberta Lois Mitchell and from The Rt. Hon. Justin Trudeau who praised our volunteerism.

Knights of Columbus State Deputy Vince Reyes spoke of the influence of CWL on his life growing up in the Philippines. He introduced a new project, Novenas for Life, which he hopes will get CWL support.  Finally, he invited all present to a wine and cheese reception hosted by the Knights, a most refreshing and appreciated end to the evening.

Thus ends a long but fulfilling day in our convention journey. 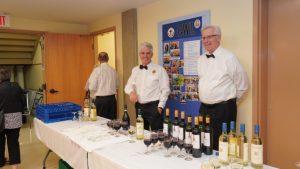 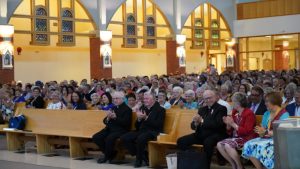 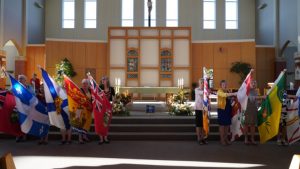 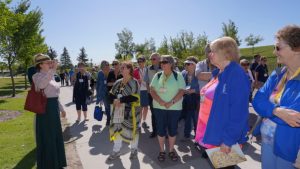 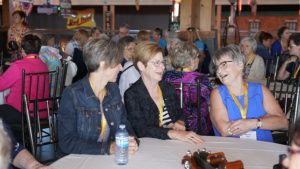 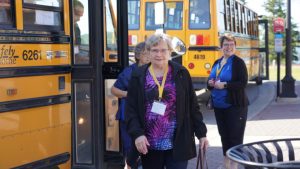