Words of the opening hymn “All are Welcome” rang through the room as we opened the day with celebration of the Eucharist. In his homily celebrant Archbishop Gerard Pettipas (Grouard-McLennan) reflected on the gospel story of the rich young man who asked Jesus what should he do to inherit eternal life. He invited us to enter the story to imagine being there, watching or participating. He focused on Jesus’ look of love which enters into other gospel stories, a look that invites into deeper relationship, an invitation that the young man despite his goodness is unable to accept as he is unable to let go. Archbishop noted that there are many things in life that we want but do we REALLY want them. Desire is not enough; Jesus asks a great deal and we must be ready to sacrifice. Discipleship requires a focus on Christ to sustain a relationship that is more valuable than anything else in the world. We begin with the desire to be His disciple.

National President Anne Marie Gorman opened with the acknowledgment of treaty land and people. Business was then interrupted by a traditional Calgary welcome carried out by the Calgary Airport White Hatters, a tradition since the 50s. Members of the national executive/board were given white cowboy hats, a symbol of hospitality. They were asked to stand, raise their right hands and solemnly swear that, “I, having just arrived in the only genuine Western city in Canada, namely Calgary, will be duly treated to exceptional amounts of hospitality, and do solemnly swear to extend this hospitality to all I meet hereafter.” Having sworn, they were asked to raise hats and say, “Yahoo!”

National Spiritual Advisor Bishop Stephen Jensen (Prince George) began his message with, “Howdy Gals, I just moseyed over from the West”. He then drew attention to our home, lives and nature as God’s gifts and a reminder of the stewardship that we must exercise. Our home is in common and includes the supernatural environment of the church. The League is an expression of that common home, based on faith, hope and charity. Implementation of new steps in the League is an opportunity to work together, building a common home where we find friendship and cooperate to make God’s home.

Greetings were brought to the assembly by representatives of the Presbyterian Women’s Missionary Society, the United Church Women, the Ukrainian Catholic Women’s League of Canada and the Women’s Inter-church Council of Canada.

Honorary Life Member Irene Lefort spoke about the Catholic Women’s Leadership Foundation, quoting from the Spring issue of The Canadian League magazine. (If you haven’t read it, now’s the time). The first group has graduated and a new group has begun studies. The foundation has an independent board with CWL representation; Life Member Cecile Miller is the League’s new representative. Irene asked for three things from the League: Pray, Donate, Participate.

Maribeth Stewart Blogoslawski, World Union of Catholic Women’s Organizations (WUCWO) Vice President General and Regional Vice President for North America, and President of the National Council Of Catholic Women (United States), brought greetings and read a letter from the WUCWO President General. She also gave an update on current WUCWO activities. A former WUCWO President General, Ma Del Pilar Bellosillo, is a candidate for canonization. In terms of the environment, WUCWO is advocating clean ups every Saturday in September and encouraging the involvement of school children. If League councils wish to participate in this effort, they are asked to send photographs of their clean up efforts to WUCWO (info@wucwo.org).

The provincial presidents’ reports featured many common themes and activities, but each conveyed the distinct flavour of her respective region. The reports contain much valuable information, food for thought and innovative projects. PLAN to read them in The Canadian League magazine this fall; they are worth the read!

Anne Marie Gorman’s report gave details of a very busy year, travelling the country and attending many meetings at home and abroad. She exhorted us to never underestimate how valuable it is to be with each other and to become better listeners to the Spirit. Again, check out this report in the fall edition of the magazine.

National Secretary-Treasurer Janet McLean asked, “What would an organization do without a secretary or treasurer? National would do just fine thanks to the office staff.” She noted two fee increases, to convention registration and to life memberships.

Three informative standing committee reports from National First Vice President and Chairperson of Spiritual Development Shari Guinta, National President-Elect and Chairperson of Organization Fran Lucas and National Chairperson of Christian Family Life Pat Deppiesse were presented. Read all about them in the fall magazine. To entice you to read, Fran has some great ideas for Christmas gifts.

The assembly approved sending a letter to the Canadian Conference of Catholic Bishops commending the conference for its document Protecting Minors against Sexual Abuse: A Call to the Catholic Faithful in Canada for Healing, Reconciliation, and Transformation.

The first resolution, under the standing committee of Christian family life, Resolution 2019.01 Canada to Honour its Commitment to the United Nations Convention on the Rights of the Child was presented, debated and adopted. The resolution calls for the federal government to honour its commitment to the Convention by providing legal protection to children before birth.

Euthanasia Prevention Coalition (EPC) Executive Director Alex Schadenberg described the League as a group of women who care about people. In the midst of a cultural push for euthanasia, we need to push back by telling stories of those with direct experience. He described euthanasia as the abandonment of the human person at the time of greatest need, not as freedom or choice. Canada needs to share its experience with others. Compassionate care programs are needed. We can help EPC by donating Air Miles®. A cheque for $18,235.52 was presented to Alex.

The afternoon opening prayer had the theme “Come, Walk on the Water With Me” and featured a beautiful meditative visual musical on screen.

What do CWL members do after a day of reports and business? They PARTY! The Western Shindig lived up to its name featuring traditional Alberta beef and beans, singing cowboys, photo-ops with props, rope swinging cowboys, branding, great line dancing and a country band, the Deputies. Members enthusiastically accepted the invitation to learn to line dance, becoming remarkably proficient in steps such as the cowboy strut. They sang along, clapped and danced with great energy and delight. Cowboy hats and western wear were everywhere. YAHOO! 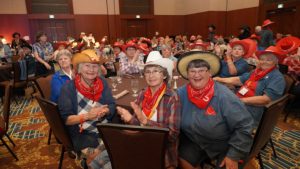 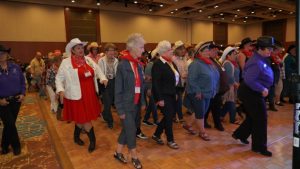 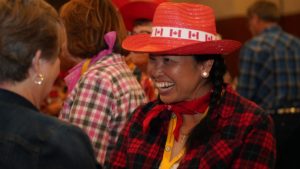 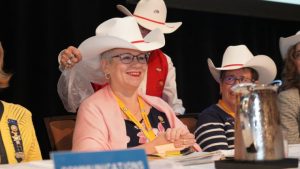 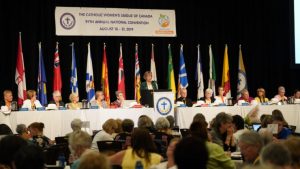 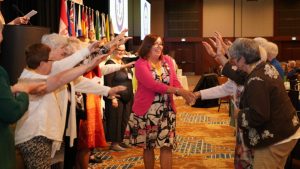 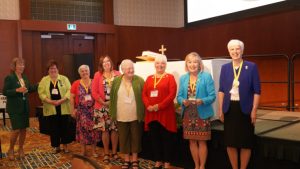